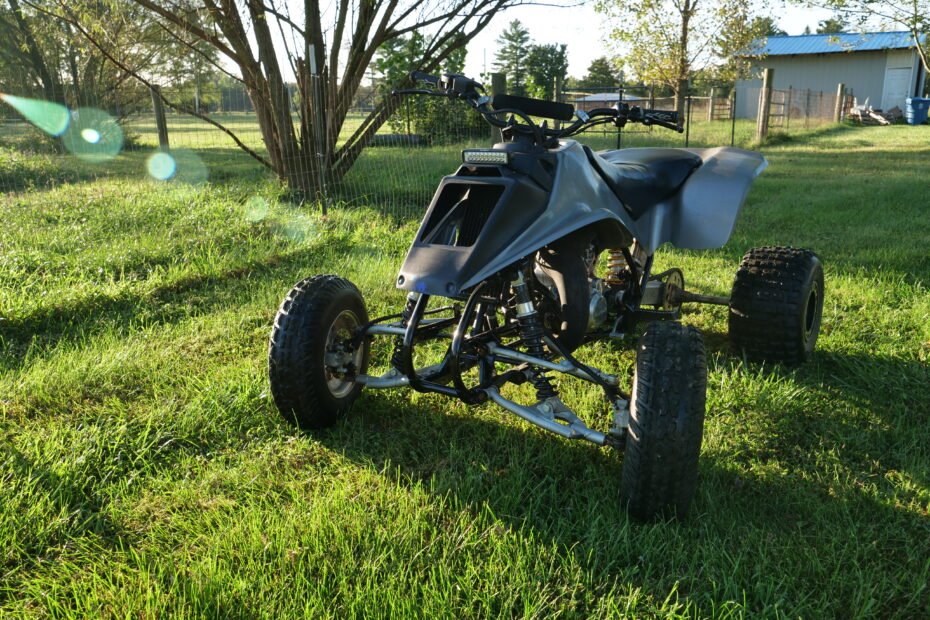 There is a lot left to do with this machine, but its ready for a day of riding.

Will and I spent a couple of days this week tuning the new Mikuni carburetor using the also new 6 Sigma jetting kit. It seems to be running pretty well now, but I do still think it needs new reeds. Its also a little rich on the top end, but from doing some research, that could also be because of the reeds.

Getting in was easier than I thought it would be.

We landed this rig at my mother in law’s house, which is at the end of a very, very tight road with her place being a bit tight as well. There is almost no flat area on her place. It’s Northern KY after all.

My trailer is a 24′ flatbed and so I was a bit worried we would get caught down there with no easy way to get back out, but it turns out is works just fine. I pulled it up out of the front yard to get it out of the way a bit and there was plenty of room left over.

Deep in the woods of Bavarian, we have a bit of a playground. Well, there are many, but I’m talking about this one for now.

This particular little playground is a bit trappy if you aren’t familiar, like I wasn’t. Anyway, I took a jump over a berm and to my surprise, the other side was a 15″ or so ditch with a very sharp bottom. Man, I can tell you that I was really looking for a take back or do-over as soon as I started down that ditch.

Luckily, today was not the day I crashed and burned doing something stupid and the worst damage I took was a bit of dirt on the front end of my nice quad.

We are blessed to have such a great place to play.

Yes, it is a dump, but we feel really blessed to have such a great place to play with our family.

Time to load up again and clean the bikes and change the fluids for the next ride – hopefully next weekend.