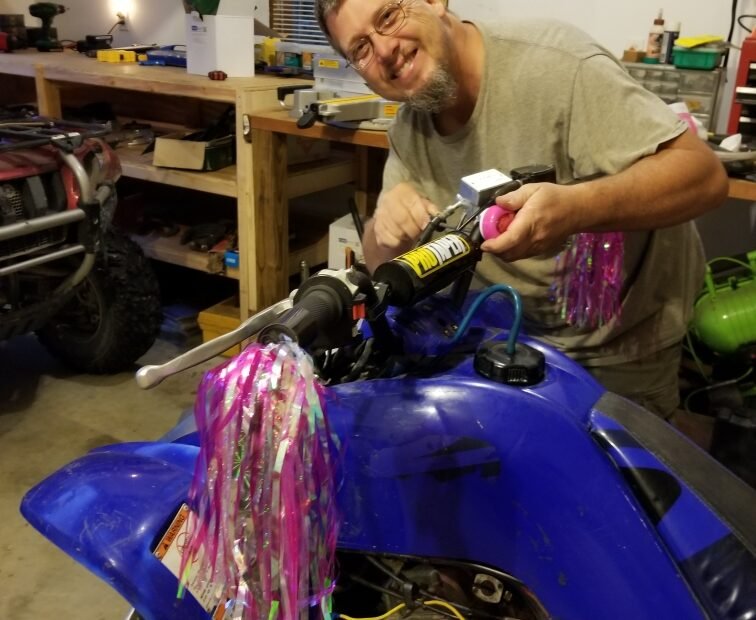 It’s actually my daughter’s Raptor. More on that in a bit. I’ll go through my day to bring us to the point of getting the quad.

Mondays are my usual day off. this morning was a bit slower than most, as I was a bit wore out from staying up late and getting up early over the weekend and I was really rather content to sit at the computer and work on some Hive and website stuff. As you may know, I have a new weekly contest over at @DiggnDeeper.com, so I was messing around with that, mostly.

Once I got that going, I went outside and cleaned out the roof washer for our cistern system. I didn’t take any pictures, so if you don’t know about cistern systems, it may not make any sense. Essentially, the roof washer grabs all the stuff like leaves and what-not that comes off the roof and filters it so that it doesn’t go into the cistern.

Since fall weather in the form of windy rain started today, I thought it would be a good idea to clean it out before it got overloaded with stuff.

Anyway, that was pretty quick and easy.

Once I got in and back from lunch, I got on the computer again and checked Facebook Marketplace for more quads for my daughter. We had and appointment with a guy for a wore out old Honda 400ex after 5pm when he got off work, but I just wanted another look around to see what I might have missed. Actually, I’m just addicted to looking for quads.

The guy was awesome. He was a young dread lock wearing black guy and he seemed rather entertained by my 12 year old son. He showed me all the upgrades and boogers on the machine and I gladly handed the cash over. He wasn’t gong to even count it, but I talked him into it. I mean I triple checked it, but just felt better that he counted it too while we were standing there.

We chucked it in the back of the van and headed home. @William-Gregory and I were pretty excited to get it home and get a better look at it and of course see what my daughter thought of it.

Or course, with Brooke being the girly-girl she is, we had to have a little fun and throw on the final “mods” to her bad-ass quad.

Of course, she got home super late and exhausted from working all day, but we did take it out for a little late night ride. She was all smiles and loves her new toy.

Now we get to go riding and when the weather turns wet, we’ll start pulling it apart and cleaning up all the boogers.